"Wrecking Ball" is a survivor of the outbreak in Z Nation.

Not much is known about Wrecking Ball's life before the outbreak, except that he had an uncle named Sam Custer and a cousin named Zeke Custer.

Wrecking Ball is the nephew of Sam Custer. He is a highly disliked guy who spends a lot of his time smoking Z-Weed, which grows in a greenhouse connected to a potential cure to the virus, labeled "Batch 47". He drives his uncle's car behind the medical wagon with survivors suffering from radiation poisoning, who are trying to get to Edmonton. 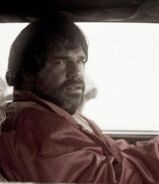