"The Murphy" is the first episode of Season 2 of Z Nation and the fourteenth episode of the series overall. It first aired in the United States on September 11, 2015.

As the nuclear weapons are activated,10K, Doc and Roberta avoid the fallout by taking cover in a tunnel.

All of this is happening while Citizen Z is dealing with the Northern Light listening post being overrun by zombies,the reanimated soldiers who died during the posts botched evacuation from the series premiere,having been thawed by the failed thermo-nuclear missile strike. He subdues them before sending an emergency broadcast telling anyone listening to be on the lookout for Murphy and as an extra incentive, announces that the CDC will hand out cures and large bounties for Murphy's safe delivery.

Mack rides up on his ATV to discover Addy killing the last reanimated member of the Sisters of Mercy. Addy explains to him that Sam, the child banished from the camp on his 13th birthday returned, burned the camp to the ground and released the zombie bear. The two ride off to see what they can find. They decide to get the message out to the others that they’re alive, but their commandeering of a radio transmission reveals that the entire world is now looking for Murphy as well as the reward for his captivity and escort to the CDC lab. Addy suddenly picks up a strange numeral code on her ham radio, repeating excessively.

Murphy, meanwhile, strips of his decaying skin and now has a rather shiny silver color. He also has his own posse of zombies and they've all gone looting clothing at a thrift store when he runs afoul of a survivor who wants to take him in for the bounty. The plan goes awry, though, when Cassandra appears and impales him. Cassandra appears to be a half zombie half human, like Murphy. Murphy tells Cassandra not to give the man mercy, and turns him into his personal zombie assistant.

Meanwhile, Roberta is starting to have a breakdown as she's gone off on her own in search of help for 10K and the wounded Doc. Just before going through with giving herself mercy rather than dying of starvation, thirst or exposure, she hears the sound of a Young Girl being attacked by a large amount of zombies. She saves the girl and is taken in by her family. They give her water and supplies and she meets up with Doc, 10K, Mack and Addy, all of whom have been reunited.

The group travels to Cheyenne, Wyoming, where they find Murphy running a zombie strip club. Roberta demands he accompany them to California, but Murphy shows them zombified strippers instead. Suddenly, when a bounty hunter (Vasquez) arrives to take Murphy, pandemonium arises and Murphy and Cassandra escape.

Finally, Roberta and the gang resolve to find Murphy and get him to California, while Citizen Z runs off to find help.

Meanwhile, Serena, a Sister of Mercy member who had intercourse with Murphy is now pregnant. She roams the countryside alongside her baby in search of Murphy. 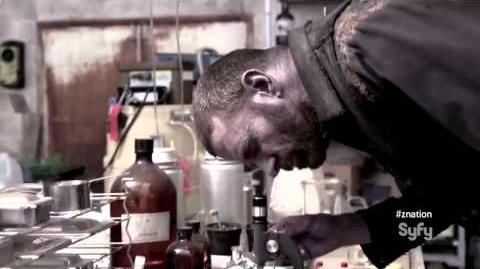