Private Robins aka The Gatekeeper is a character featured in "Z Nation", first encountered in Season 1 Episode 4 "Full Metal Zombie".

Nothing is known about Private Robins' life before the outbreak started.

Private Robins, aka The Gatekeeper, is a soldier under General McCandles' command.

He mans the gate for the former Department of Infection Control building where General McCandles is held up, reluctant to let anyone in.

Due to the horrors he's seen, he has become an addict. Doc bribes him with his limited supply of Oxycontin in order for the heroes to talk to the general.

After Doc is let into the building and starts yelling for help from the air ventilation shaft, the rest of the heroes force their way in, bringing Private Robbins with them.

When the General opens the elevator onto a floor overrun with zombie soldiers, Private Robins is killed and zombified. Later on, the heroes are forced to give him mercy when he attacks them. 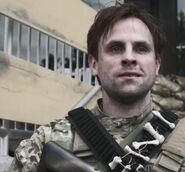 The Gatekeeper, outside of McCandles' Tower 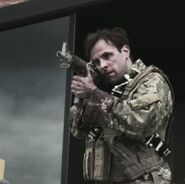 The Gatekeeper on guard

The Gatekeeper with the heroes being watched by General McCandles

The Gatekeeper, given mercy
Add a photo to this gallery
Retrieved from "https://z-nation.fandom.com/wiki/The_Gatekeeper?oldid=20684"
Community content is available under CC-BY-SA unless otherwise noted.