Start a Wiki
watch 01:32
The Loop (TV)
Do you like this video?
"The Collector" is the eight episode of Season 2 of Z Nation and the twenty-first episode of the series overall. It first aired in the United States on October 30, 2015.

The team is low on supplies and Murphy wants to eat brains, which is a new development and probably sort of a serious one. In fact, when Murphy and Doc go off to look for something to eat, it's Murphy’s lust for brains that actually gets him captured in a pit with another zombie. It turns out it's a crazy nerd type named Dean, aka 'The Collector,' and it doesn't take him long to learn the identity of his latest catch: The Murphy.

Dean puts a shock collar on Murphy and takes him on a tour of his insane zombie museum. They discuss classic zombie movies like White Zombie (with Bela Lugosi, 1932), eventually making their way to George Romero's Night of the Living Dead and agreeing that much like what we're watching, the best kind of zombie stories are the ones that are both scary and funny.

As Murphy gets the chance to take a shower, the team continues to look for him throughout the town, only to find that there aren't a lot of people 'round these parts.

After Murphy attempts to escape, Dean ties him to a chair on a makeshift television studio set and commences with an exclusive interview with The Murphy. Dean collects DNA, takes a plasma and bone marrow sample and keeps shocking his guest with the collar. And then something that seems kind of important happens: Murphy tastes brains for the first time, during which new kinds of synapses go off in his head and he actually gets a little upset when talking about the baby daughter he had to give up.

It turns out that Dean is collecting various forms of Z's, most of which we've seen before: the radioactive Z's, the phytozombies, the Blasters. He's got them all, including celebrity zombies, such as George RR Martin, the Game of Thrones creator himself, all done up in zombie get-up. Dean is keeping him in a room where he just signs copies of his books over and over again.

When Murphy tries to escape again, Dean shows his even crazier side, brutally electrocuting his guest as 10K shows up asking if Dean has seen "a blue guy." 10K sees through Dean's ruse and sneaks into the zombie museum, where he's captured and Dean decides that he wants to see what happens when Murphy bites a human: namely, 10K.

Finally, Murphy convinces the zombie peanut gallery to sneak up on Dean and eat him alive, after which he passes out from weakness and has to be wheeled out of the zombie museum by 10K. As the team reassembles and prepares to get back on the road, Murphy makes Roberta promise that she won't leave him alone when they get to California. 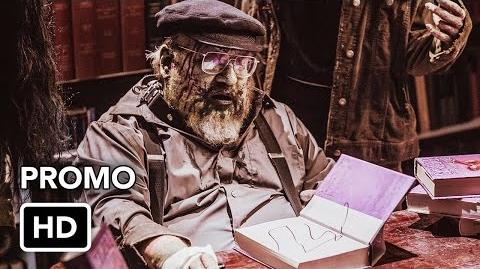 Retrieved from "https://z-nation.fandom.com/wiki/The_Collector?oldid=22789"
Community content is available under CC-BY-SA unless otherwise noted.