Stranger is a character from "Z Nation", first encountered in Season 2 Episode 1 "The Murphy".

An unnamed bounty hunter is looking for Murphy, after killing his posse of zombies, he tasers Murphy into submission. Turning his back on Cassandra who then kills him. Murphy doesn't let her give him mercy, saying he has plans for him.

He is then made into Murphy's personal zombie assistant that carries all his things. 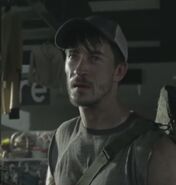