Roberta Warren is a protagonist and a survivor of the initial zombie apocalypse in "Z Nation". She is a member and current leader of the Westward-Bound Survivor Group, and a former member of the Upstate New York survivor group.

Roberta Warren is an ex-National Guard Lieutenant - activated out of Missouri ("Puppies and Kittens") - a survivor and de-facto leader of the Westward-Bound Survivor Group. Like many other survivors of the zombie apocalypse, Warren lost nearly everything and everyone that mattered to her.

As a sergeant she was stationed in Charleston, South Carolina at the Charleston Air Force Base, under General Gotleib. She was on guard duty at the gate when Fin, Nova, and Lucas arrive at the base to borrow a plane. She doesn't believe he is Fin at first. It took a call to General Gotleib before she would allow him in. She was still there when a Sharknado hit. It is unknown if this is canon, however. This makes Roberta the first character to be shown in the Sharknado film series followed by Doc who appeared in Sharknado 5: Global Swarming.

She is first seen giving Sophia Grizwald mercy. She is later with Garnett when dealing with the arrival of Murphy and Hammond in a boat. She and Garnett initially agree to help Mark and Murphy reach the military convoy. Finding the convoy destroyed, she finds a baby. She notes that she does not understand how to hold a baby properly. She is last seen leaving with the group for California.

"Welcome to the Fu-Bar" Edit

"Doctor of the Dead" Edit

Roberta‘s flashback is shown where she is a National Guard Lieutenant. She is first seen talking to her boss on her phone whilst telling the rest of her unit to be quiet whilst they’re watching hockey. When the conversation ends, Dineen appears and asks if he can catch up with his unit the following night. Roberta denies this after learning that she was ordered to order vehicles from Philadelphia to Trenton. She soon hear a crashed ambulance and goes outside to investigate. She turns off the sirens and goes inside the back only to find a zombified patient. After it tries to bite her, Roberta tries to find her help, but to no avail. She comes back inside the building to find it abandoned with the phone lines cut. She goes into the break room to find a message saying to not panic. She hears a noise and thinks it’s one of her men. A zombified Dineen attacks Roberta but she quickly evaded him. She then grabs her sidearm and kills Dineen. Soon, more of Roberta’s zombified men quickly swoop in as well as two ambulance workers. She kills them all and realises what they are. Zombies.

"I have a mission" - Roberta to Murphy

"Get out of that chair! That's my husband's favorite chair!" - Roberta to Murphy.

"I feel naked, and not in the good way." - Roberta without her machete.

"I went to catholic school." - Roberta to Charles.

"Are you sure you didn't go to catholic school?" - Roberta to Charles during sex

"You may be the mission, but today you became our friend. Thank you." - Roberta to Murphy

"That bitch is the reason you're still alive." - Roberta to Murphy about Dr. Merch

"Yeah, you and your posse, ya'll think you got us by our short and curlies, but when I leave you gonna be cryin' like little girlies!" - Roberta to King Clown

"I hate the apocalypse" - Roberta to George

Charles Garnett "Is that what I think?" Roberta Warren "They ain't sharks!" ("Home Sweet Zombie")

Roberta Warren "I really hate Sharks." Lucas Stevens "Could be worse. Could be zombies..." ("Sharknado 3") 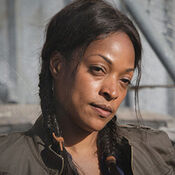 Roberta as a sergeant in Sharknado 3

Add a photo to this gallery
Retrieved from "https://z-nation.fandom.com/wiki/Roberta_Warren?oldid=28592"
Community content is available under CC-BY-SA unless otherwise noted.