Nothing is known about Red's life before the outbreak started.

He became zombified at some point prior to him attacking Doc, Mack and Addy while they were trading with Sketchy and Skeezy in the beginning of "Puppies and Kittens".

With the speed which he attacked the heroes, it was obviously a recent infection.

Addy killed him with the Z-Whacker and his brothers, also turned into zombies, attacked soon after.

Skeezy recognizes Red and laments the loss of a good customer since the outbreak. 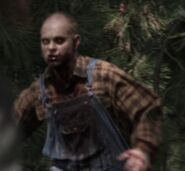