Nothing is known about Rastafarian prior to the outbreak.

Rastafarian is an unnamed man who is barbecuing a small animal on a burning barrel, alongside other survivors. While barbecuing, he and the others are listening to Citizen Z's broadcast. 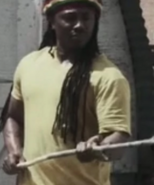 Rastafarian among another survivor
Community content is available under CC-BY-SA unless otherwise noted.