Start a Wiki
"Puppies and Kittens" is the first and premiere episode in Season 1 of Z Nation. It first aired in the United States on September 12, 2014.

The President is dead; the ZN1 virus has taken over the earth, and is being called an “extinction-level” event. Lt. Mark Hammond, a Delta Force soldier, is rushing to rescue the last doctor working to create a vaccine for the virus, just as new orders come that everyone evacuating to California. An NSA operative named Simon "Citizen Z" Cruller helps get the chopper to his location.

As Hammond arrives in the doctor’s office, he finds three prisoners being infected with a strain of the zombie vaccine. It doesn’t work for the first two, and they’re killed, but just as they test the virus on the last prisoner, confusion ensues as the zombies attack. Hammond evacuates the Doctor and puts her on the chopper, just as he goes back for the last prisoner. Meanwhile, Citizen Z gets left behind at the Northern Lights listening post.

One year later, in upstate New York, we join the funeral of an dying elderly woman named Sophia "Nana" Grizwald. Roberta Warren, a US National Guardswoman does the honors and puts her out of her misery. She receives a call that two men are arriving by boat. She joins fellow guardsman Charles Garnett and the two wait for the men in the boat to roll up to shore. The two men are revealed to be Hammond and Murphy, the last prisoner with him, now identified as the “last best chance to save humanity.” Back at the Northern Lights station, Citizen Z is conversing with a recording of his girlfriend Daisy. A call comes in – the government needs to know where Hammond and Murphy are and “Operation Bite-Mark” is a failure. Meanwhile, Roberta and Charles decide to help get Hammond and Murphy to the Tappan Zee Bridge.

And now we meet Addison "Addy" Carver, Mack Thompson and Steven "Doc" Beck, three survivors who are getting some ammunition tips from two peddlers named Skeezy and Sketchy. Addy decides on an aluminum bat with spikes in it while Doc trades with aspirin and oxycontin. They’re attacked by four zombies and kill them before moving on back to Camp Blue Sky.

While at the camp, two other survivors, Redburn and Donner are out patrolling when they discover several zombies resting ashore and hundreds more floating in the water. The zombies are only pretending to be dead and rush the camp. Roberta and Charles are worried when they call back to camp and can't make contact. Mark then decides to tell them why Murphy is important, and show them the zombie bites on Murphy. Doc turns up on the radio and realizes that Camp Blue Sky has been over-run by zombies. While Addy, Mack and Doc flee for their lives, Mark, Roberta, Charles and Murphy come back for them.

The team pulls up to the rendezvous station outside a high school, and learn that everyone’s been over-run by zombies. They then discover a baby inside of a damaged car. The survivors also save Cassandra, a Cambodian American survivor who has been locked in a cage hiding from zombies for two days. She tells the team that the school was overpopulated with survivors and then zombies attacked. The team decides that they’ll take the baby to the next outpost, and raid the place for supplies. Meanwhile, a sniper is seen watching them. The sniper then saves Doc’s life from the roof after he gets attacked by a zombie. Then a ton of zombies attack. During the attack the baby dies, for unknown reasons. Hammond goes in to find the baby and kill it, while the rest of the team debate leaving the infant in there for good.

When Hammond finds the reanimated baby, he is attacked by both the infant and the mother, who begin to eat him. The team shoots the mulitated Delta Force operative, as well as the undead mother and baby. Charles Garnett then takes over as the group's leader. The team stands around the high school parking lot considering what to do, and while they’re doing so, Citizen Z interrupts them, making contact. He learns that Hammond is dead, and asks if the package is safe. Since Charles Garnett is in charge now, Citizen Z brings them up to speed on Operation Bite-mark, which is getting Murphy alive to California. Charles decides that they’re on board, and they stop on the way out of the high school to pick up 10K, the sharpshooter who saved Doc. While driving off, Murphy pulls a tooth out of his head.

"I didn't tell Hammond go get eaten by a baby." Charles Garrnet 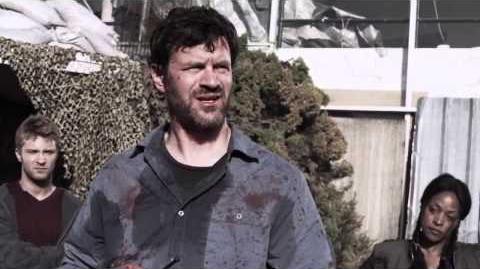 Retrieved from "https://z-nation.fandom.com/wiki/Puppies_and_Kittens?oldid=27025"
Community content is available under CC-BY-SA unless otherwise noted.