"In accordance with the Emergency Executive Order Section 7 you are hereby notified that you have been selected for exposure to an experimental substance. Should the test fail, all efforts will be made to contact your next of kin. Signed President Lindsay Barton."
-Marilyn Merch quoting the executive order for the record to administer the experimental vaccine to the prisoners in Puppies and Kittens

Lindsay Barton is a character referenced in "Z Nation", first mentioned in Season 1 Episode 1 "Puppies and Kittens". She was the President of the United States during and possibly after the zombie outbreak.

Nothing is known about Barton's life before the outbreak started except that it can be assumed she was a cabinet member of the presidential administration of Bill Carney.

President Lindsay Barton (deceased prior to "Puppies and Kittens") was (presumably) the last President of the United States and most likely made president in the course of the line of succession.

She signed the Emergency Executive Order, specifically Section Seven, that resulted in Alvin Murphy receiving the injection that made him what he is today. Although she was dead when the injection was administered, Dr. Merch used that executive order to continue the experimentation to find a cure for the ZN1 virus.

In "Full Metal Zombie", an insane General McCandles thinks he's talking to "Madam President" (assumed to be President Barton but no surname is given). 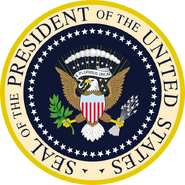 Seal of the President of the United States of America
Community content is available under CC-BY-SA unless otherwise noted.