"Philly Feast" is the third episode in Season 1 of Z Nation. It first aired in the United States on September 26, 2014.

The episode begins in a flashback; we get to see a bit of Cassandra’s past. At one point she was a member of a group in Philadelphia, in which she would front as a prostitute, luring male survivors into trailers with the promise of sex - only to assist in robbing them and adding them to the group's cannibalistic "food" supply. In the present, she's riding with Roberta and Charles into Philadelphia. They find a truck with the Liberty Bell attached to the back of it and when they open the door to steal it, a zombie pops out. After 10K quickly neutralizes the threat, the group appropriates the truck and drives off with the Liberty Bell, but are quickly diverted when the truck swerves to miss an oncoming zombie attack. The bell falls off and kills several zombies.

Back at Northern Light Listening Post, Simon cooks steak for his new pet. He mentions that there is a massive supply of food there, including several different cuts of steak.

Back in Upper Darby, PA, the Philadelphia cannibals are gathered around a table for a meal when one of the members of the “family” comes back and tells their leader, Tobias, that Cassandra has been located.

Meanwhile, the team is finishing the last of the food they’ve found (mostly Twinkies). They decide to split up and look for food and some kind of antenna dish that Addy can use to contact Citizen Z. Addy and Mack find a police cruiser with a working radio and end up killing a zombified police officer along with his detainee. Doc, 10K, and Cassandra have a conversation about pornography while securing a satellite dish and Cassandra runs off when she realizes that her “family” have found her. When Cassandra gives them the slip by ducking behind a dumpster, they decide to kidnap Addy instead, banking on the idea that the group will be willing to make the desired trade.

Citizen Z manages to connect with the police radio in time to hear Addy being abducted and is then able to relay this information to Mack upon his return rather than having him think she has been bitten. Mack then grabs Addy’s camera and beats a hasty retreat as more zombies attack. Tobias tells Addy not to be afraid and plays an eerie tune on a small organ, then offers her some meat of unknown origin. Addy says she’s not hungry and is not interested in joining their group - at which time the other two girls take her off to get some new clothes.

The team confronts Cassandra because Addy’s camera reveals that one of her abductors was Travis from the refinery - which means Cassandra is implicated. She cracks and tells them about Tobias, the leader of the “Family,” and describes them as being worse than zombies; they are cannibals. They don't eat dead people as corpses are infected with the ZN1 zombie virus, they capture live people and slowly cut off their flesh. The group decides to go and rescue Addy while back at the Upper Darby compound the "Family" sits down to what is now known to be a rather gruesome meal. As Addy is given an impossible ultimatum, the rest of her group rolls up and Charles gets into a standoff with Tobias after he signals 10K to kill "family" member Bernt. Finally, Cassandra approaches and offers herself as a prisoner swap for Addy.

Back at the truck, the team assembles to discuss what’s next, and whether or not they should go back and rescue Cassandra. They call up Citizen Z from the police radio and ask him to play some music. They then put their plan into effect by sending Doc in to pose as a man named "John" interested in having sex with Cassandra. As Cassandra is sent into the trailer with him, he tells her to follow his lead. As the "family" hears the team approaching with music blasting, as well as Doc and Cassandra pretending to have intercourse by making moaning sounds. The diversions work: Cassandra and Doc are able to kill one of the guards and she tasers Tobias in the mouth.

The Westward-bound group rides into the Upper Darby compound with a zombie hoard and rescues Cassandra and Doc. Tobias haphazardly attempts to hide in the room where the food supply is being held captive, and as the zombies overrun the compound they detain him and seal his somewhat ironic fate. The team rides out of Philadelphia intact and listening to the music that Citizen Z is playing for them. Addy and Cassandra seem to have developed a close bond from their shared experience, which seems to worry Mack somewhat. 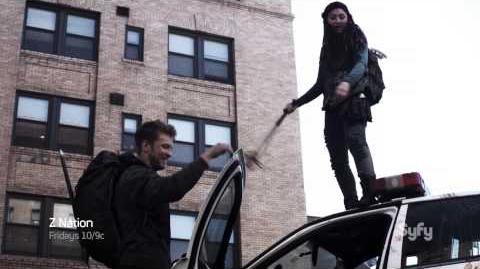 Retrieved from "https://z-nation.fandom.com/wiki/Philly_Feast?oldid=24644"
Community content is available under CC-BY-SA unless otherwise noted.