Nothing is known about Pa Kettle prior to the apocalypse, other than the fact that he lived with his wife, Ma Kettle, at the Kettle Farm.

Living with his wife outside Springfield, Illinois, Pa Kettle encounters Murphy and Lucy wandering around outside. The couple invite them in. Reluctant to trust Murphy, Pa Kettle keeps his shotgun aimed at him the whole time. Murphy tells them that he no longer trusts his group and fears for his child. He then asks if they would take care of Lucy for him. Ma Kettle is inclined to do so but upon looking at Lucy, they realize she is not an ordinary baby. They tell Murphy to leave, but Murphy asks them for one last favor.

Later, the couple are seen caring for Lucy, both having been bit and therefore under mind control by Murphy.

"They Grow Up So Quickly" Edit

As Addy and Doc show at the house up they convince Pa that they are there to bring Lucy to her father. It's clear that Lucy can control the blends just like her father as she can speak and ask questions through Pa Kettle.

Eventually, the family agrees to come with them but is intercepted by The Man, he stabs Pa and Ma and takes off with Lucy. Pa and Ma accuses Addy and Doc for leading the Man to Lucy and attacks them.

Later, they are both killed by Doc and Addy out of self defense. 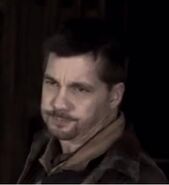 Add a photo to this gallery
Retrieved from "https://z-nation.fandom.com/wiki/Pa_Kettle?oldid=27319"
Community content is available under CC-BY-SA unless otherwise noted.