Nature Boy aka 5K is a main character in "Z Nation", first encountered in Season 3 Episode 1 "No Mercy".

Nature Boy was an orphan living in Mercy Labs. He was 4-5 when the apocalypse began. As an orphan, he found friends among a murder of crows. He brought them water in exchange for food. At an unknown point, he was found by Red. Red brought him to Mercy Labs, where he resided but often left for unknown reasons. He is generally followed by his crow-friends. Due to him not being raised properly, he often caws to communicate rather than speak.

Upon encountering the Westward-Bound Survivor Group, he becomes fond of 10K. He colors his hair black and dresses like 10K, which leads Doc to refer to him as "5K." He is revealed to be a prodigy regarding his skill with a slingshot.

The beginning of No Mercy shows Nature Boy sneaking around Mercy Labs and watches as The Man threatens Mercy Labs. He then throws a rock at The Man, who in return shoots him with a bean bag and says he will be back in 24 hours and if Doctor Teller isn't willing to go with him, he will kill Nature Boy. He is then loaded up into the trunk of the Man's car with a zombie. He is out of it and when he wakes up he panics but is able to escape the trunk. He takes off into the woods where he runs into 10K. He then brings him to the group and Nature Boy speaks and tells them that the Man is going to kill his sister and the people at Mercy Labs. The Westward-bound Survivor Group debate about helping or not and when it seems like they aren't going to help, Nature Boy steals 10K's rifle and takes off with it - probably on purpose to lead them to Mercy Labs. Red then intervenes and Nature Boy is shown tackling onto 10K and the three engage into a fight until Warren breaks it up. Nature Boy is seen possibly dead after the attack on Mercy Labs.

Nature Boy is presumed to have been killed by zombies during the attack on Mercy Labs, but is revealed to be alive in this episode.

"Everybody Dies in the End"[]

It is unknown if he is dead or alive as of this episode, since Lucy dives off the cliff after Addy, and for unknown reasons Nature Boy runs after them as well and jumps off.

It is revealed that 10K believes 5K died in "Everybody Dies in the End" when Red and 10K rush down the mountain to find 5K they see a flock of crows flying around something or someone when they finally cleared it revealed a mangled and ruined body. 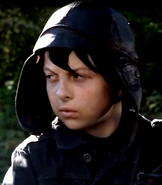 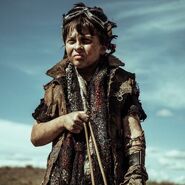