Mark Hammond was a main character and a survivor of the initial zombie apocalypse in Z Nation. Briefly, until his death, he was the leader of the Westward-bound survivor group seeking to deliver zombie-immune Murphy to Mount Wilson Station, the only known lab that survived the zombie apocalypse.

Prior to the zombie apocalypse, Lt. Mark Hammond was one of the most respected members of the elite Delta Force. A military man to the core, Hammond was willing to do whatever it takes to ensure a possible cure for the zombie virus is found.[1]

Hammond is a Delta Force operative. In 02AZ, he assists a doctor Marilyn Merch in injecting three prisoners at the Portsmouth Naval Correction Facility with a vaccine. Alvin Murphy is the only survivor and has proved immune to zombie bites, Hammond decides to bring him to California where the vaccine can be extracted. Together with eight other soldiers they get the calling code Delta X-ray Delta, and travel towards California.

In 03AZ, he together with Murphy are the only survivors of the team as they arrive at Camp Blue Sky. Hammond meets the Westward-bound survivor group and insists that they assist him in finding a group of military personnel nearby. When the group proves reluctant to help him, he holds them at gunpoint and presents Murphy's bites. He explains that getting Murphy to California is vital to finding a cure. When the group finds the military personnel's' location, they find many corpses and zombified military. They also find one baby. The baby is infected, however, and attacks the group. Hammond agrees with the group to kill the zombified baby to give Charles Garnett peace of mind and eliminate the danger of the baby to the group. Hammond enters the lobby and searches the building. While coaxing the baby to come out from under a car in the lobby, he is flanked and attacked by a female zombie, catching him off-guard. The baby zombie then helps the female zombie eat Hammond. When Hammond screams, the group finds him covered in blood, close to death. The group then shoots Hammond and the two zombies repeatedly, killing both the zombies and Hammond. Hammond's radio is later retieved from his corpse to contact Citizen Z.

Hammond's primary weapons seems to be an HK416 SMG with RIS foregrip and Beretta M9 pistol. The HK416 SMG is later seen as one of Mack's weapons in Resurrection Z.

"You are looking at the only known human to have survived being bitten by a zombie." -- Mark about Murphy.

"Those are zombie bites. Eight of them." -- To the group about Murphy.

"An ex-cop and some others taking shelter in a prison 20 klicks up the road." -- Mark, on how he heard about Camp Blue Sky (an oblique reference to The Walking Dead)

While searching for the zombie baby, he was attacked by a female adult zombie. The two zombies mauled him.

The group finds him mauled on the ground. The group kills the two zombies and gives Hammond mercy by shooting him in the head. 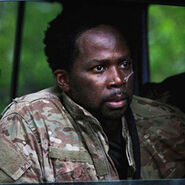 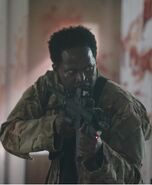