Nothing is known about Madeline's life prior to the outbreak or her full name.

Madeline was a member of Major Williams's Province Town.

When the camp is overrun by zombies during the Resurrection Cult's assault, she hides in the town's shower room, where she encounters Murphy.

After realizing he isn't attacked by the zombies she threatens him.

A group of zombies then rushes in to the showers and Murphy backs out, leaving her to be killed.

A group of zombies ignores Murphy and attacks her. 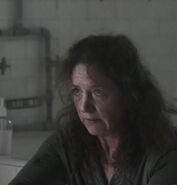 Madeline, moments before her death