Part of Province Town he was persuaded by a survivor named Jacob to leave the camp and become part of a church who believed that the Zombies were holy resurrected and Jacob was their leader and messiah.

Luke then joined The Resurrection Cult, only to come back to Province Town, sneak into the armory and commit suicide. Zombified by his death, he killed countless victims and was responsible for the downfall of Province Town.

Luke sneaks into the armory, took out a blade, and slice open his own throat, allowing him to bleed out. He is seen as a zombie

Luke, one of the anointed ones, in the Church of the Resurrected 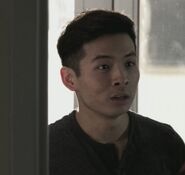 Luke, zombified
Add a photo to this gallery

Retrieved from "https://z-nation.fandom.com/wiki/Luke?oldid=27947"
Community content is available under CC-BY-SA unless otherwise noted.