Lucy Serena Murphy was a character in Z Nation. Although what Lucy is classified as is unknown, it can be assumed that she is one-fourth zombie (as her father, Murphy, is half-zombie) and three-fourths human (as her mother, Serena, is 100% human). She was, briefly, a member of the Westward-Bound Survivor Group; she resided outside of Springfield, Illinois, but was with The Man for a certain amount of time.

Lucy is born in a stable under a star, with several zombies lurking about. Her mother, Serena sacrificed herself to save Lucy. The next morning, Murphy sat at the side of a road with Lucy, newly born, in his arms. Not too fond of Serena's list of names for the child, he honors his own mother Lucinda by naming his child Lucy.

When the group is concerned about Lucy and her zombie-like characteristics, they try to get her away from Murphy to examine her. However, fearing for her safety, Murphy flees with her into the woods. She begins to cry, attracting zombies, forcing her father to calm her. The two leave and find a house with two people, Pa Kettle and Ma Kettle residing there. Murphy pleads for Ma Kettle to take his daughter because he is afraid that: the group wants to exile her; she will be experimented on alongside her; Murphy simply cannot care for her. Before Ma Kettle can agree to be Lucy's caretaker, Lucy opens her yellow-tinted eyes revealing to them that there is something wrong with her. Murphy tries to explain but the scared couple draw on Murphy. He then asks them for a favor. The ending scene is Lucy in a crib at the couples' house. However, they have bite marks on their faces, similar to that of Cassandra's. It is presumed that Murphy bit them to control them, making them the guardians of his child.

"All Good Things Must Come to An End"[]

Lucy was seen at the end of the episode as a fully-grown little girl. Her absolute age truly unknown; she seems to have grown extremely fast, appearing between the age of 4-6. Her appearance was otherwise the same: she was still blue like her father and had bright blonde hair. She was making two unknown zombies have a princess-style tea party with her.

It's unknown if she's as misanthropic towards humans as her father, or being a child, simply doesn't understand what she is. Like her father, she's shown as treating the Z's like personal play toys. She laughed with glee when they couldn't drink their tea properly—the last line of Season 2 was "bad zombie," followed by her giggle.

"They Grow Up So Quickly"[]

As Addy and Doc try to get close to Lucy, they are captured by Pa and Ma Kettle. They are tied up and try to convince the family that they intend to retrieve Lucy to give her to her father. It is then proven that Lucy can control blends just as her father can since she seems to be asking questions through Pa Kettle. She can also control zombies as she uses them as playmates. At the Kettle house half a dozen zombies can be seen, so she already shows signs at controlling large groups. As Doc and Addy show up the zombies attack them and Doc is forced to kill one. Lucy, who has never seen a zombie be mercied before, gets upset and runs into the woods. While there she encounters an ender (not zombie but not human as their brains have been fried) and Addy ends up saving her.

The Kettle family agrees to come with Addy and Doc but are intercepted by The Man before they leave. He stabs Pa and Ma and hits Addy over the head. He then takes off with Lucy in a car. Lucy begins to ask questions, so persistently that The Man tasers her. The Man then puts a bag over her head and ties it up with rope. Through Murphy we see that Lucy feels as if she is going to suffocate, causing another growth spurt. The Man eventually takes the bag off of Lucy's head; she has grown from a child to a pre-teen.

Addy finds Lucy flicking matches near a gas station. After she stops her, Lucy refuses to go with Addy. Addy then threatens to mercy her zombies, thus she ultimately agrees to go. The two encounter The Man. Since The Man is taking Lucy with him, Lucy bites a stray arm so Addy can find her. Addy eventually escapes from the burning boat she was stranded on and immediately seeks Lucy. Meanwhile, Lucy continues to annoy The Man, chanting "You're gonna die." To counter this, The Man drives over countless zombies (since Lucy can feel their pain) until she stops.

Addy finds the truck The Man was driving, and his body lying on the ground. She and Lucy quickly escape. Addy notices Lucy is starting to go through puberty, so she decides to take Lucy shopping. She explains what bras are and do, as well as the difference between Lucy and most humans. Upon mentioning her mother's, Serena's death, Lucy gets really angry. Just when they were about to leave, The Man shows up. The Man nearly drowns Addy in a nearby river and takes Lucy with him. On the way, Lucy has yet again another growth spurt. Lucy exits the car and pleads for The Man to retrieve a chocolate bar for him. The next scene with the two takes place in a store. Lucy grows impatient, teasing The Man with his fear of her zombies. She then experiences her period, which reveals that her blood has a blue tint. Lucy then corners The Man with her zombies and escapes. She drives The Man's car away from the store, running over The Man in the process. When she finds Addy, The Man is shown hiding underneath the truck. He takes Lucy hostage yet again. The episode ends with Doc and a very bruised Addy driving off in a stolen vehicle, seeking Lucy.

"Everybody Dies in the End"[]

Lucy experiences another growth spurt and appears to be around 18 years old. The Man and Lucy arrive at their rendezvous point at Mount Casey. They are greeted by many zombies, all of which are killed by a Zona SWAT team. The Man tells them to arrange for air transportation to Zona for him and Lucy.

Near the end of the episode, Roberta and the rest of the group find Lucy. However, The Man pulls a gun on them. He takes Roberta hostage, but Murphy decides to fight him himself; Roberta is released. The Man then shoots Murphy and Roberta, taking Lucy hostage once more and leaving the scene, right before the cliffhanger at the end of the episode.

Lucy and Addy are shown helping a family on the episode Warrens Dream, they later get kidnapped by a group of survivors and are forced to start shooting at 10k and the others. Addy later gets shot in the cheek and then Lucy gets taken away. Lucy ends up escaping and meeting with the group, "Doc, 10k, Roberta, Sargent lily, and Murphy. Before Lucy and Addy part, Addy tells Lucy to go meet up with her at a survivor outpost in Canada called Newmerica. Lucy later dies of old age to save her dads aka Murphy's life. 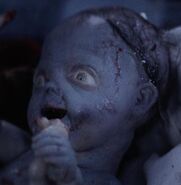