He is an actor and writer who has worked with production company The Asylum numerous times before Z Nation. He has been in episodes of What I Like About You, Scrubs, Buffy the Vampire Slayer, Charmed, and Will & Grace. 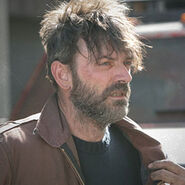