Julia Vasquez is a character featured in "Z Nation", first encountered in Season 2 Episode 12 "Party With the Zeros".

"Party With the Zeros"[]

Julia is taken along with her mother by the Zeros because her father, Javier Vasquez, was a DEA agent pursuing the Zeros drug cartel.

She was executed by Escorpion, along with her mother, in front of her father. 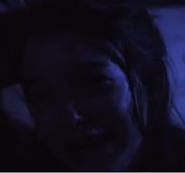 Julia before she is shot by Escorpion.

A zombified Angie and Julia Vasquez.
Community content is available under CC-BY-SA unless otherwise noted.
Advertisement