Jordan Beale is a character featured in "Z Nation", first encountered in Season 2 episode 14 "Day One" .

Nothing is known about the Jordan Beale's life before or after the outbreak started except that he was a hockey player.

Beale appears in Addison Carver's flashback with Mack whom she met during the outbreak. Beale argued with Mack Thompson when suddenly a zombie comes. They both run inside the locker and fights several zombies. Off-screen, Beale was infected by a zombie and later killed by Mack Thompson. Beale's dead body was shown in the episode but not the actual death. 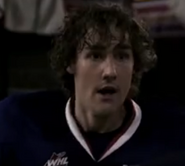