A Major in the National Guard. He and Charles Garnett served together before the zombie apocalypse.

He is the leader of Province Town, a peaceful camp located in Hannibal, Missouri.

Later, one of the people, Jacob, defected and started his own group; the Resurrection Cult. He is excumunicated along with his followers.

After Jacob convinces three people to return to Province Town, they commit suicide inside the walls and the camp is overrun. Jacob and his cult make their way inside.

Major Williams has a chance to leave but he chooses to stay and try to save the survivors of Province Town.

Major Williams is killed by The Resurrection Cult and he turns into a zombie. 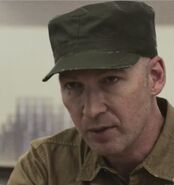