She and her husband Jason was part of the Zimmerman brother's team to get a large amount of drugs from MESA Pharmaceuticals inc. Jason and Brett thought of a plan to break in and steal Oxycontin.

When Jason is killed she retreats together with Brett and Henry. Encountering Murphy they kidnap him to use his abilities to get into " The Fort Knox of Oxycontin" that is MESA.

While inside she comes fact to face with Jason, now turned zombie. She is unable to kill him and is bit instead.

Before the apocalypse she was married to Jason and worked as an english teacher for junior high. Jason was a cop. They had been married for five years before he died.

When Murphy spits in her water canteen she becomes susceptible to his telepathic abilities after drinking the water. Murphy can control her actions and uses this ability to make her an ally against Zimmerman. 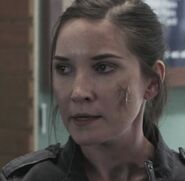