Nothing is known about Janet prior to the zombie apocalypse.

During the events of "Zunami", Janet is holed up with her daughter in an apartment. Her husband Cam is outside; however, he has been infected and become a zombie.

During the Zunami, Murphy enters the building and robs them of their water and food. As Murphy departs from their building, he leaves opens the door to Janet's building to let her zombified husband "reunite" with his family. 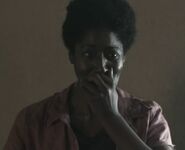 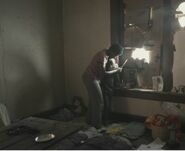