Hopper is a character featured in "Z Nation", first encountered in Season 3 Episode 9 "Heart of Darkness".

Nothing is known about Hopper prior to the apocalypse.

Hopper is working for the Red Hand and is according to his own statement, their drug dealer. He offers to take Roberta, Sun Mei and Hector to the Red Hand.

Later on, during the attack on Murphytown, led by Roberta, Hopper is attacked by zombies and is killed. 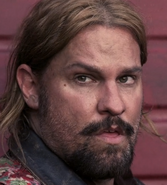 Hopper being devoured by zombies