Edit
watch 01:39
Hawkeye Is Here To Amaze - The Loop
Do you like this video?
Play Sound

Homer was one of the chief engineers and original designers of the Edgemont Nuclear Power Plant in Edgemont, South Dakota and worked there for 20 years.

After the outbreak, Homer and his son Max holed up in his house in the woods to survive.

After the death of his son, Homer shut himself in his house and refused to do anything about the danger at the power plant.

His house was surrounded by a perimeter of barb wire, mines, and tripwire traps to keep zombies out.

When the power plant went critical, Amelia Grady says he is the only one left in Edgemont who knows how to work the reactor to prevent a meltdown.

The heroes infiltrate his house, avoiding the traps there, and convince him to help them shut down the reactor.

Once inside the power plant, he uses a robot named Robbie to try to repair the reactor, but it is destroyed by the zombies (after killing many of them with its laser).

Homer leads the second excursion into the power plant and he and 10K don heavy-duty protective suits to go into the cooling area but a zombie attack breaches his suit.

After successfully shutting down the damaged reactor, Homer begs 10K to give him mercy to save him from death by radiation poisoning and zombification. When 10K refuses, he cuts the rope holding him above the reactor cooling pool and falls in, committing suicide.

Homer kills himself by dropping into the reactor so that 10K will kill him.

After Homer becomes zombified, 10K gives him mercy (referenced but not shown). 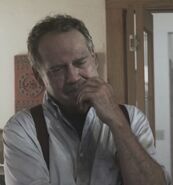 Homer planning with the heroes how to shut down the reactor

Homer outside the plant with the heroes

Homer, after his containment suit is ruptured by a radioactive zombie

Homer dies in the reactor
Community content is available under CC-BY-SA unless otherwise noted.
Advertisement