He was a world renowned psychologist whose specific field was in team building.

Due to Iggy's unfair banishment from his group, Iggy returned and smashed Gideon with the talking stick. 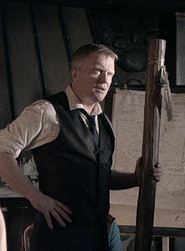 Gideon after he is killed

The Corporate Group
Community content is available under CC-BY-SA unless otherwise noted.
Advertisement