"Fracking Zombies" is the second episode in Season 1 of Z Nation. It first aired in the United States on September 19, 2014.

Citizen Z starts off trying to get in touch with the CDC's Mount Wilson Station, but they’re under attack by zombies. In order to get them out, he needs to fry their mainframe remotely, but doing so will erase all of the computer's data files, including the information on the vaccine. As he watches zombies storm in, he executes the command, deleting files including Murphy’s info document as the Mount Wilson Command Center falls.

Meanwhile, the team is stranded by the side of the road when one of their vehicles runs out of gas. Additionally, they need to pull a zombie out from under a tire. But as two bikers go by, Cassandra hides.

As Citizen Z realizes that someone is inbound to the Northern Light listening station. He goes outside and arms himself. Meanwhile, the team stops by a shopping mall to look for gas and supplies. While there, Travis, one of the bikers they saw on the road earlier turns up and says that there could be gas at an oil refinery in New Jersey.

The team heads to the refinery while Citizen Z approaches the man on the dogsled near the arctic listening station. As a zombie on a dogsled arrives, Citizen Z shoots the zombie but realizes the dog is still alive. However, another dog has reanimated.

As the team pulls into the refinery, they see that it's overflown with zombies. The team then realizes whatever is inside one of the distillation towers is something that is attracting the zombies. The team can smell gasoline so they know that it’s there and thus decide that they’re going to go inside and investigate the refinery, but also decide it’s possible they can steal a gasoline tanker. From past experience, Cassandra knows that zombies like high-pitched noises, such as the music box she wears as a necklace.

As Cassandra and Travis go up to the top of the staircase, he tells her that she needs to "come home." Meanwhile, Addy Carver and Mack Thompson are close behind, and cavalierly killing zombies on their way up. When they get the pipe at the top of the tower jammed, they learn that the zombies are falling into a pit of oil. Meanwhile, the zombies are also drawn to Cassandra’s music box.

As Roberta and Charles fill up the tanker truck, Murphy and Doc play cards and tell their backstories. Murphy lies, saying that he volunteered for the zombie virus trial. Murphy advises he has a fear of the zombies when a few surround the vehicle, it causes him to panic. When Doc tells him to relax and goes outside to give mercy, Murphy locks the door. Up on top of a platform, Cassandra and Travis fight about the fact that she’s never going "home" and then Travis asks, “What happens when I tell them what you are?”

Back in the listening station up north, Citizen Z is trying to kill the reanimated dog he saw earlier. He tries killing the dog by shooting it with his Sig Sauer P250 pistol but shoots randomly. Back at the refinery, zombies are everywhere as Doc fights them off. 10K, the sharpshooter picks them off but Murphy drives off in the group's suburban before Doc can get back in.

As the zombies close in around them, Charles tells Roberta and the others to go while he saves Murphy. Meanwhile, Travis holds Cassandra hostage at the top of the building and tells her it’s time to go "home". She kicks him off the top of the structure, falling to his death. Cassandra throws her music box necklace down to the body to get rid of all memories of the life she is leaving behind. Citizen Z runs out of bullets taking random shots at the undead dog. The living dog is being attacked, causing Citizen Z to rip off a plank from a nearby crate and jumps down to kill the zombified dog. After Murphy crashes the truck, a fire erupts which ignites the fuel truck - along with all the fuel they were after. With the mission a bust, the team leaves the refinery as the zombies begin to catch fire. 10K manages to score them a couple gas cans full of fuel, Addy gets her bat back, and Citizen Z locates them thanks to the explosion. He accesses a payphone via the NSA’s listening grid, and advises the team to continue heading west "until they hit ocean."[1]

As the team roll on to California, two more bikers show up at the refinery and recognize the now zombified Travis. They both kill him and are presumably hot on the trail of Cassandra.

"You are not going to kill the only living thing I've seen in a YEAR!" -Citizen Z before killing the zombie dog 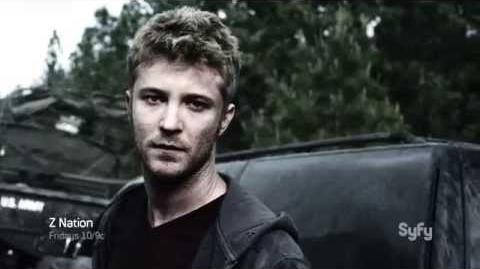 Retrieved from "https://z-nation.fandom.com/wiki/Fracking_Zombies?oldid=22594"
Community content is available under CC-BY-SA unless otherwise noted.