Forman is a character featured in "Z Nation", first encountered in Season 1 Episode 7 "Welcome to the Fu-Bar".

Fist encountered at the Fu-Bar. He is seen sitting at the table drinking. He brags to Doc about his awesome ride and eventually goes out to pee. Murphy follows him out and tries to rob him of his keys when he passes out.

Forman comes to and there is a struggle between him and Murphy. Murphy ends up biting his shoulder. Shocked by his own actions, Murphy hits Forman over the head with a rock and runs off.

Forman then rallies a group of people to go after Murphy. In the struggle, Forman and a few others are killed. The others turn zombie but Forman doesn't.

Murphy later returns to his body and pulls out a piece of his own tooth stuck in the bite wound on Forman's shoulder. 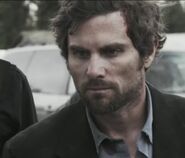 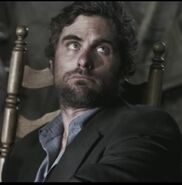 Forman drinking in the Fu-Bar.