Start a Wiki
watch 01:11
The Loop (TV)
Do you like this video?
"Doctor of the Dead" is the thirteenth and final episode of Season 1 of Z Nation. It first aired in the United States on December 5, 2014.

Four years before the zombie apocalypse, a physician was wandering the streets of New York picking up junkies. We see him enter a building where a Krokodil addict is alone in his apartment. The doctor says he is not there to help the man, but rather that the man will help him. He then proceed to take some of the man's brain-matter with a syringe.

Meanwhile, in the present, California is no longer the final destination of the team. As Citizen Z contacts Warren with news. He tells them that he thought he had been hacked, but that he believes that it's a transmission from Dr. Merch, the doctor who originally experimented on Murphy. The group is now headed to Fort Collins, Colorado to meet up with Dr. Merch. Murphy tries to express his feelings of gratitude towards Doc, only to be shot down as Doc talks about all the pain Murphy will go through as they get to the lab. Meanwhile Cassandra looks to be at death's door. En route to Fort Collins, the team talks about their plans for the future: Doc plans to buy a boat, Roberta is considering settling down in California and 10K has about six thousand more zombies to kill.

When they arrive, Roberta handcuffs Murphy as a precaution - Murphy, in turn, heads toward the entrance as many zombies go for the group. Forcing them to hide in the car and call out for Murphy's help. After letting the team sweat a little, Murphy escorts them through the crowd of the undead and into the lab.

Back in the past, 3 years before the apocalypse, in an Ebola quarantine camp, the same doctor shows up to presumably perform the same brain-tissue process on an Ebola patient.

In the present, 10K and Doc kill a few zombies as the team infiltrates the lab where they believe Dr. Merch is waiting to help Murphy. It turns out all they find are some old computer files suggesting that scientists had been working on a vaccine even before the actual zombie outbreak.

As the team goes further into the facility, they have to remove their clothing to go through the decontamination procedure. The team can see that Murphy is almost covered by scars, with Warren saying that they seem to be growing.

Back in the past, the same doctor is seen in pre-apocalypse Kazakhstan in an abandoned biological facility with a dirty cop. Upon arriving, they find a dead body which has been dead for a while. Whilst investigating the body, the doctor released a toxic gas and gets rid of the cop's mask, forcing him to breath the toxicity.The doctor then repeats the same brain matter procedure he did the years before.

Further into the lab they discover the results of human experiments that had been going on. Worse, they uncover a new breed of mutant zombie: strong, deformed, ready to kill and decidedly unimpressed with Murphy. He isn't really impressed with them either, as, in a display of sudden brutal strength, he tears off their heads with his bare hands.

As the team continues to explore the facility, Cassandra becomes too weak to go on and the team finds her a safe place to lie down, perhaps to die. They all say their goodbye, Murphy being the last person in the room.

As they proceed without Cassandra they find a blood trail on the floor leading to a quarantined area. On a table they find a half dissected corpse of a man, named Brandon Doyle that is still alive. He is lying in front of a computer, where he shows them a video of how he got to be this way. He was infected with the virus and Dr Merch injected him with a trial vaccine. It prevented him from turning zombie, but it wont let him die. The door to the lab them opens, but instead of Dr. Merch we are introduced to the doctor we've seen in the flashbacks: He presents himself as Dr. Kurtz, who says he's here to help.

Citizen Z, who has access to the world's highest caliber facial-recognition software, quickly realizes that Dr. Kurtz is not who he says he is. After some research he finds that he's actually Dr. Walter Kurian, want for selling bio weapons to North Korea, Iraq and Iran. Realizing the they have been led into a trap, Citizen Z frantically tries to warn the team to kill the doctor.

Kurian tells that group that Doyle was patient zero and that Murphy needs to come with them. Murphy volunteers to give Doyle mercy, and Doyle whispers, "Don't trust him". After giving mercy, Murphy refuses to go with Kurian. Doc tries to keep everyone calm and 10K sees the message from Citizen Z on the screen that they need to kill Kurian. At this point someone is knocking at the lab door. In comes Cassandra, looking like a zombie with a bite mark on her cheek. She talks slowly and tells the soldiers not to shoot her since she is not dead. Murphy then looks at Cassandra and gives her the order to kill Kurian and his team. A gunfight ensues, Cassandra easily dispatches the two soldiers, after which she is shot by Dr. Kurian. During the fight, Doc is shot and Murphy escapes.

Murphy runs through the lab chased by Kurian. In the decontamination room, Citizen Z warns Murphy not to breach the quarantine without going through decontamination. Murphy, however, has had it. He accuses Citizen Z of leading them into a trap and refuses to trust him. Murphy screams that he doesn't trust anyone, he has lost everything, including himself. As Citizen Z almost gets through to him, Kurian breaks through the door and aims his weapon at Murphy. Murphy pulls the door open and activates the fail-safe: a thermonuclear warhead. Murphy runs to the elevator and begins to "shed."

Meanwhile, the rest of the West-bound Team is still in the lab, attempting to revive Doc when the soldiers that Cassandra killed earlier turn. However, Cassandra returns as well and fights them off, giving the team time to escape. They reach the elevator and find Murphy's skin and clothes, but don't have time to ponder as they see the warhead coming their way.

As Citizen Z watches on, he's alerted to several other warheads launching from around the globe, fail-safes against nuclear attack, set on dead-man triggers. Among the targets, is the NSA Northern Lights Command Outpost, where Citizen Z himself is located. Citizen Z rushes to the surface and stares at the warheads as they fly towards their pre-set targets, muttering "God, I hate the apocalypse."

At the end of the episode; Roberta, Citizen Z, 10K, Doc, Mack, Addy, Murphy, and Dr. Kurian are all confirmed to be alive, although their continued survival looks bleak. The season ends.

Kazakhstan in the year 02 BZ.

Haiti in the year 01 BZ.
Add a photo to this gallery 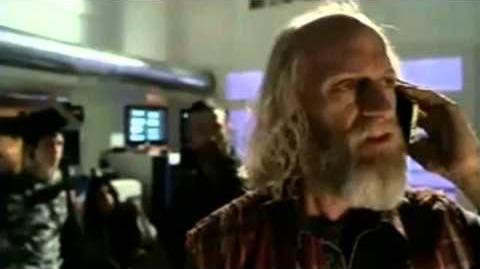 Z Nation 1ª Temporada Episódio 13 – Doctor of the Dead (Promo).
Add a photo to this gallery

Retrieved from "https://z-nation.fandom.com/wiki/Doctor_of_the_Dead?oldid=24748"
Community content is available under CC-BY-SA unless otherwise noted.