Dean Madeline aka The Collector is a character featured in "Z Nation", first encountered in Season 2 Episode 8 "The Collector".

The collector aspired to be part of the Centers for Disease Control and Prevention, repeatedly warning them about the possibility of a zombie pandemic. He grew bitter after repeated rejections and began his own preparations for what he saw as the inevitable zombie apocalypse.

The collector mentions that he happened to be at a Comic-Con when the zombie outbreak began. Dean, now calling himself "The Collector", converted an abandoned museum into his private Zombie Gala,where he would capture several zombies using a trap door with a strung-up brain as bait that connects to the basement of his private emporium. In the 8th episode of the second season: "The Collector", Murphy accidentally wandered into Dean's trap, where the infamous collector soon became aware of the identity of his latest catch: The Murphy .

Ecstatic over meeting the only human to survive a zombie bite, Dean took Murphy through a grand tour of his facility, describing it as "what it would be like if comic con and a museum did it". Dean soon takes Murphy to get a shower,after which Murphy attempts to escape his loony captor,who had placed a shock collar on Murphy, only to be shot by a tranquilizer gun.

Murphy wakes up tied to a make-shift talk show studio, where Dean collects samples of Murphy (DNA, blood, and bone marrow), before taking Murphy on a tour of his zombie display (including a Toxic Z, a Phyto Z, and a Blaster, along with a zombified George RR Martin) all with shock collars and are placed inside invisible electric barriers. Also there is an upcoming display called "The Murphy", causing Murphy to flee in a panic,only to be electrocuted severely by a rigged door.

As Dean intends to drain the uncooperative Murphy's blood, 10K sees Dean and asks him if he's seen his "blue friend", only for Dean to play dumb while shocking Murphy with his collar to keep him quiet. 10k sees through Dean's ruse and sneaks into the museum basement and comes upon the zombie display with its newest addition: a restrained Murphy, having been drained of at least 6 pints of blood.

10K tries to get to Murphy, only to be struck with Deans cattle prod. 10K wakes up in his own barrier with a collar too, as Dean wants to see what happens when Murphy bites a living human, and continuously shocks them both into obedience. As the weakened Murphy seems to agree to bite 10K, Murphy commands the zombie displays (how they got out of their electric barriers is never made clear) to attack Dean, and the collection promptly charges at the collector, feasting on him as he screams at Murphy, who coldly tells Dean that there is no mercy in his (Murphy's) world as Dean dies. 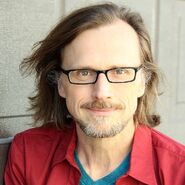