Nothing is known about Dana prior to the outbreak, other than that she was on a work retreat when the apocalypse came.

The Westward-Bound Survivor Group encounter another group of survivors, including Dana.

Dana spent a lot of time with Addy, as she helped her trying to get the radio to work.

Dana expresses her thoughts about wanting to leave. As the episode progressed she seemed to develop a liking towards Addy. Throughout the episode Dana is seen checking Addy out, holding her hand, and getting very close in a closet.

Unfortunately she ended up being one of the people who stole food and helped shoot Murphy. But in the end all was well and she was forgiven.

At the end of the episode Dana and Addy talk for awhile then Addy sits in the back watching Dana as she leaves hoping she will see her again.

It is shown in this episode that she might have a crush on Addy.

After the episode her fate is Unknown.

"Some place to go, I like the sound of that". - Dana towards Addy. 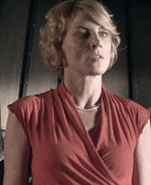