Cassandra, formerly known as Sunshine by Tobias Campbell and his "family", is a main character and a survivor of the outbreak in Z Nation. She was a member of the Westward-Bound Survivor Group, and a former member of the Philadelphia cannibal survivor group. Alive until having her blend life ended by 10K. She was also an ally of Murphy after he bit and turned her into one of his blends.

Cassandra was the last known survivor of the Philadelphia cannibal survivor group. She was, at least for a time, a "bait" used to attract male survivors with the promise of sexual trade. She was a prostitute in this role and was to incapacitate her victims so they could be robbed and cannibalized. What she was before the zombie apocalypse is still unknown.

Cassandra was described as a mystery. She is very short but looks can be very tricky. She is quite the "sass" and has feisty written all over her. She is very quick at responding and loves to make the chit chat short and sweet also. She was close to 10k in the group.

After Murphy's bite, she suffered physical and psychological changes. Endurance and strength, but she showed a high dependence on Murphy and great affection for him too. To date, even up to her second death, Cassandra showed no real signs of her former self. She had little of her old personality, at most she only repeated that she wasn't dead.

She acted hostile towards the others and showed no real attempt at trying to reconnect to her old friends. Murphy, did little to try and help Cassandra. If anything he treated her no more than a toy or a pet that followed him around.

She said few to little or no words. The only difference from her and the "Z" was that she never ate. Though it was hinted she ate Wrecking Ball, it's never been yet confirmed. Her empathy totally gone, she showed no emotion to events such as Mack's death or even the birth of Lucy. Her only concern is that of being near/or listening to Murphy.

She is first seen crouching in a cage with many zombies surrounding her. Doc, Addy, and Mack clear away the zombies. When Mack approaches her, she pins him against the cage wall with her knife. After standing still for several seconds, she lets Mack go. She then nervously joins the group. She is last seen leaving with the Westward-bound survivor group.

Cassandra is fearful and looking around and telling the group why they are in Philly. This is where he former group was living and searching for her when she ran from them. After being chased and escaping members of her former group kidnap Addy to replace Cassandra aka Sunshine. After Mack pins her down and demands answers Cassandra runs and tried to get away. Mack and Warren trap her in an alley where she tells them where Addy is. The group goes and saves Addy and Cassandra gives herself up in exchange for Addy. Later the group goes back for Cassandra and she joins them again.

When the group meets back up with Addy and Mack, she's shown limping and being helped by 10k. When Mack asks what happened to her leg, it is revealed that she cut her leg on a piece of barbed wire and the cut is infected.

Cassandra was deathly ill from a leg infection which was first introduced in Sisters of Mercy. The group was forced to leave her on a bed in a room in the military hospital they were in to move on. When Murphy went into her room to "say his goodbyes", he bit her on the face, perhaps to spare her from becoming a zombie (as he had prevented Forman from becoming a zombie in "Welcome to the Fu-Bar". The group, unaware of Murphy's action, went on and left Cassandra behind.

Later Cassandra saves the group from Dr. Walter Kurian, displaying quasi-zombie attributes as well as unnatural strength and speed. She does this by subduing a soldier and shooting both him and his partner with his gun. Later, when the two soldiers she shot reanimate as zombies, she subdues them again, allowing 10K and Roberta Warren to escape with the injured Doc. It seems as though she does not manage to escape the military hospital before it is destroyed by a nuclear missile. After the nuke goes off on the lab Cassandra crawls out and looks for Murphy.

Cassandra finds Murphy in a clothing store and saves his life. He dresses her in stripper clothing and a fur coat and they go to a strip club.

Cassandra is put on babysitting duty for Lucy by Murphy. She seems to be getting frustrated by Lucy's nonstop crying. She breast feeds the baby. Addy questioned how that was even physically possible but Murphy told her it was the apocalypse and to just "roll with it".

Murphy, afraid the group wants to harm Lucy leaves and orders Cassandra to make sure "No one leaves" when he takes off with his baby Lucy. When Addy, Doc and 10K try to leave to find Murphy Cassandra goes after them and pins Addy down, as she screams Doc and 10K come back and both are angry at Cassandra for hurting Addy. 10K tells the group to get ready to run again while he stays and keeps Cassandra from getting them. 10K and Cassandra fight and when Cassandra pins 10K trying to crush his skull, 10K pulls out a knife and Stab's her in the head. Blood comes from Cassandras mouth, her eyes go back to normal and she falls and dies. 10K buries her body as the others return to camp. Murphy shows up as well without Lucy.

"You forget. I'm used to it." - Cassandra to Travis on being tasered.

"They're worse than Z's!" - Cassandra to Garnett, Roberta and Mack about Tobias.

"I could use more z-weed." - Cassandra after Doc pulls a hatchet from her back. 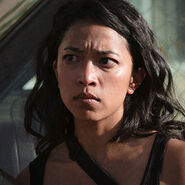