Nothing is known about Buck's life before or after the outbreak started.

Buck and his fellow survivor Otis were together after the zombie apocalypse. They came from North Hood, North Dakota. Otis later explained to the Westward-bound survivor group that he and Buck heard that the Zunami was the result of a million people in a refugee camp in Alberta, Canada, all dying of starvation over the course of a week. They had to flee ahead of the Zunami.

They meet the heroes in the Nebraska Small Town where they are running from the "Zunami". A zombie tripped him and Buck was bitten. Roberta Warren shot him in the head before he could turn. 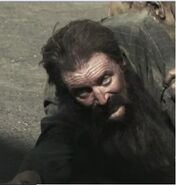