He was working with Priest Jacob in the Resurrection Cult, they believed that the zombies were holy resurrected and close to God.

After making their way into Province Town, Eli is tasked with rounding up survivors and bring to Jacob. They are then given the option stay alive part of the cult to serve the zombies, or become zombies.

After Jacob shoots Charles Garnett, Eli is shot in the head by 10K.

"Raise your hands to the heavens! Or I will resurrect you where you stand!" - Eli to Garnett. 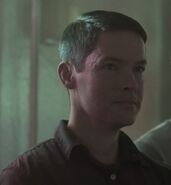 Brother Eli helps the Resurrected to stand in the Church of the Resurrected.
Add a photo to this gallery
Retrieved from "https://z-nation.fandom.com/wiki/Brother_Eli?oldid=20131"
Community content is available under CC-BY-SA unless otherwise noted.