Alvin Bernard Murphy, sometimes referred to as "The Murphy" and "The Package", is a main character and a former antagonist, as well a survivor of the outbreak in Z Nation. After having been bitten eight times, but not infected due to an experimental vaccine that he was forcibly injected with as an inmate of Portsmouth Naval Prison by Marilyn Merch, he became the only known survivor of the ZN1 virus, and was escorted towards California by Mark Hammond in order to engineer a cure from his blood. He is a member of the Westward-Bound Survivor Group, and formerly Operation Bite Mark.

Murphy was set on making the world "blended", through biting people or giving them a "vaccine", putting the receivers under his control. Since his departure from Murphytown, it is unclear whether his ambitions are still prominent or not. He also disbanded his small group of blends. However, he is seen scheming something nefarious in the finale, which could possibly be related to the Blends, or creating a new hybrid of zombie-humans entirely.

Alvin Murphy was in prison for postal fraud when the zombie apocalypse broke out. The government, desperate for a cure for the zombie virus, started experimenting on prisoners. Murphy was the unwilling victim of medical experimentation for a vaccine, watching two other prisoners die horrifically before his eyes before it was his turn. Directly after being injected with the experimental vaccine, the medical room was overrun by zombies and he was abandoned, conscious, while strapped to the gurney. That’s when Murphy was bitten eight times; however, he survived. That meant Murphy is the key to a cure and restoring the world to a semblance of what it used to be.[1] In the episode "Welcome to the Fu-Bar", he bit a man in the shoulder. Later, Murphy discovered that the man he bit was killed, but did not turn. This could, perhaps, suggest that he can 'share' his antibodies through a bite, the same way a Zombie's bite can turn another creature. Although neither stated nor alluded to, it may be possible that by passing on his antibodies to other people, those he bites may be able to cure others via the same means. This, however, is just speculation. He can also control people by biting them. When exposed to his saliva or blood, he can use telepathy to have them act out his will. He can also have zombies do his work for him, such as locating things and fight for him.

Murphy is a misunderstood individual who is afflicted with severe PTSD as a result of being partially eaten alive. As a result of being forced to undergo this trauma "for humanity," he doesn't really care about it after he gets out. Trying to move past it, now that there is no one left to contradict him, his survival account paints himself as a hero who volunteered to be injected as something you need to do "for the kids", rather than a crying, begging, pleading inmate who had no choice [2]. One of his first acts as a member of the Westward-bound survivor group - a group press-ganged into to safely delivering him to California - was to abandon Doc and 10K in a panicked, flash-back ridden haze even as they were trying to save him from a number of zombies. He will often abandon hope and run for it, regardless of how poorly thought out that is. Such an episode led to the failure of a monumental and much-needed fuel acquisition at the Jersey Devil Refinery, which he refuses to take responsibility or apologize for, unwilling to face his actions. He is shown to be extremely intelligent and cunning, though he is not credited as such. Murphy was capable of deducing the fact that the Zombies wouldn't attack him, using this as a way to save his Allies from Priest Jacob, though this ultimately led to the death of Charles Garnett.

Whether or not the vaccine has contributed to this is unclear, but Murphy has become increasingly apathetic. One example is in "Zunami" the family, being unable to stop him from just coming in and taking their stuff, was as good as dead. As the series progresses, Murphy becomes more and more misanthropic, although he shows greater sympathy towards the zombies. Unable to kill them or watch them suffer, Murphy seems to connect more with the undead than the humans around him.

Though Cassandra and the other zombies have acted no more than mindless puppets, showing no signs of humanity; he tends to treat them more favourably. But he still treats them as no more than play-things, and Cassandra's no exception. He shows no remorse for nearly getting his old friends or others killed and shows more disdain for humanity.

Whether due to the strain of being lied/manipulated his PTSD, it's shown in "A New Mission ", he's become more disdainful, showing no more faith humankind. While he was willing to have 10K give mercy to the "starving" zombies. He had 10K shoot a warning shot in order to distance himself from the group. If they don't want to join him, he is willing leaving them to fend for themselves. His only view now is making the world his way, blended. And completely gives up on humanity and saving any remaining humans that want to join his new world.

In "Little Red and the WolvZ", Murphy shows further commitment to shaping the world to his way and has embraced a zombie diet, as he was shown feasting on brains.

He does, however, show genuine concern for his daughter Lucy, when the Man tries to threaten her and when he later kidnaps her. He goes with the group to save her, though he is injured and taken to Zona due to this.

In season four, he has seemingly been cured by the scientists at Zona, and his skin has grown back. Possibly connected to being more human is the fact that while he is still pessimistic, he is less of a jerk than he was in prior seasons, showing concern for the other members of the group, mainly Lucy and occasionally Warren. He has also become more courageous to the point where he is willing and able to kill zombies, as he does on numerous occasions alongside the group. When Lucy dies, he is devastated, and eventually lets out his feelings during a fight between the group and other survivors. In the finale, he defies Warren's orders in an attempt to save her, despite knowing what could happen to him.

Surprisingly, after all this, his true character remains unchanged. In the final scene of the finale, he is shown eating Sun Mei's brain in an attempt to retrieve the formula for the cure to the zombie virus (through transmission of information by consumption). Shortly after consuming part of her brain, he is enlightened by the newfound information for the aforementioned cure. He lets out a chuckle before the scene abruptly ending. It can be reasonably inferred that something Sun Mei knew, particularly regarding the cure, was crucial to another one of Murphy's classic schemes. This smug chuckle can only mean Murphy has a plan which benefits himself while possibly being at the expense of others.

Murphy is first seen in 2AZ, being prepared for an injection. He an two other prisoners are injected with variations of a vaccine, overseen by Dr Marilyn Merch. When the room is overrun by zombies, Mark Hammond abandons him and he is bitten 8 times by zombies. When Hammond returns, he finds Murphy alive and decides to bring him to California to extract the cure.

In 03AZ, he is seen with Hammond in a boat. After Hammond dies, Murphy considers leaving. However, Simon stresses the importance of bringing Murphy to California, causing him to go with the group.

Murphy is the target of several groups. When he is about to escape, he is detained and beaten by Addison Carver (affected by the death of his friend and her boyfriend Mack). He is captured by those who were his allies.

The new member of the Murphy family is born, in a stable under a star. Unfortunately, several zombies come to witness the birth. And Serena sacrifices herself in order to save her child. The next morning Murphy is sitting by the side of the road with his newborn daughter in his arms. He decides to name his child Lucy, after his own mother, Lucinda.

"The definition of insanity is doing the same exact thing, over and over, and expecting a different result" - Murphy to 10K (source)

"This shall be my throne room"

"You jackass, a friend of mine died trying to get to that pile of junk!" - Murphy to General McCandles

"We played cards. Once." - Murphy about Doc

"This world is over. Come with me. Start the next world" -Murphy to Warren

"They didn't even bury you, the savages..." - Murphy to the body of the man he bit

"He didn't turn..." - Murphy to himself about the body of the man he bit

"You know... Before the apocalypse, I had the same effect on the ladies!" - Murphy, after the group have to hug him in a horde of zombies

"Actually, that's the last of her water. Mine is right here." - Murphy on drinking the last of Roberta's water

"I am not one of the resurrected... I'm your Messiah!" - Murphy to Priest Jacob of the Resurrection cult

"Kill them." - Murphy to Cassandra after being confronted by Dr. Kurian

"Anything else? Can I get you a chai latte while I'm at it?" - Murphy to Zimmerman

"It's not like he's going to grow up and become a fine young man!" - Murphy about abandoning a baby

"Stunning news, and after that can we please, oh, please go to Disneyland?"

"Alright, should I be writing this down?" - Murphy to Zimmerman

"Slow ones, never thought I'd be happy to see you guys." Murphy about zombies

"Thank you, I believe I will try that one." - Murphy to zombies in a cage in Murphy's Law

"Where are you... You useless bastard?" - Murphy about Citizen Z

"I am not your stock boy." - Murphy to Zimmerman

"You're just jealous, 'cause they like me more than you." - Murphy to Roberta about zombies

"I don't like the way he said that!" - Murphy about Henry

"Why does everyone think they can boss me around?"

"Oh yeah, you make it sound so easy." - Murphy to Zimmerman

"I have a ginormous bladder." - Murphy after a pee-break

"So, we are relying on the map of a dead guy." - Murphy regarding Hammond's map

"Just because he is dead doesn't make him a hero." - Murphy about Hammond

"Ever heard of The Titanic?" - Murphy about Province Town being zombie proof

"I'm so hungry, my big guts are eating my little guts." - A seriously hungry Murphy

"Selfish little bastard." - Murphy to 10K about not sharing his twinky

"This is why we can't have nice things." - Murphy about a vandalized Mount Rushmore

"No! Tell me we are not here looking for dead hubby!" - Murphy about Antoine

"Do what you got to do. You know, for the kids." - Murphy about why he was part of the vaccine trials

"You know if we breed those two, it would be all over for the zombies." Murphy to Doc about 10k and Cassandra

"You are not the boss of me. She is." -To Vasquez and Warren

"What? I can't help it. Damn vaccine makes me crave sugar."-Murphy in Season 1 Episode 13 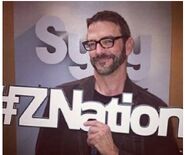 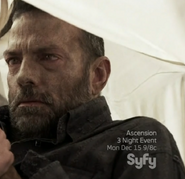 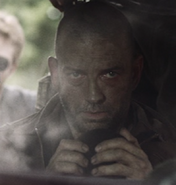