Addison "Addy" Grace Carver is a main character and a survivor of the initial zombie apocalypse in "Z Nation". She is a member, and at times, Second in Command of the Westward-Bound Survivor Group.

Addison “Addy” Grace Carver is a redheaded girl who seemingly defied the odds by surviving the zombie apocalypse. Before the world went to hell, people would describe her as sensitive, “with the soul of an artist.” When push came to shove, she had the guts of a killer.[1]

Her Facebook page, as revealed in the episode Full Metal Zombie, indicates that she "studied at ACC" and lived in Albany, New York, prior to the zombie apocalypse. In a flashback, she is seen wearing a red and gray/silver Letterman jacket with the letter "W." This backstory is contradicted in Day One, which shows Addy at a WHL game between the Spokane Chiefs and Tri-City Americans (both teams based in Washington state) when the zombie outbreak began. This is also when she met Mack, who was a player for the Americans.

In Die Zombie Die ... Again, it is revealed that she had put down her zombified mother on the first night of the breakout, being the repressed memory that torments her through the first season. Because of this memory and her short time with the cannibals, Addy possibly suffers from PTSD (Post Traumatic Stress Disorder), which put a strain on her and Mack's relationship and could be the main reason she decided to leave the group and join the all female community of abuse survivors.

In Warren's Dream it is revealed that she was bitten by Murphy's daughter Lucy, giving the pair a way to communicate telepathically. This could have happened because of the injury to Addy's eye.

Addy uses a mace (made from an aluminum baseball bat) known as the Z-Whacker as her signature weapon.

She is first seen getting her Z-Whacker from a trader named Sketchy. A small wave of zombies appear and she helps the traders fend them off. She is with Doc when they find the Upstate New York survivor group camp overrun. She joins Garnett in the search for the destroyed military convoy. She helps Doc and Mack clear the area around a cage nearby, finding and recruiting Cassandra. She is later seen leaving with the group to California.

"Welcome to the Fu-Bar" Edit

"Doctor of the Dead" Edit

Although Mack is bitten and infected, she tries to rescue him, but too late. When Mack is transformed, she gives him mercy. Soon after, she captures and hits Murphy. She confesses to her friends the fate of Mack and they leave with Murphy (and Cassandra) captured.

In the episode it is revealed that Addy is bisexual, as she develops a mutual crush on a woman named Dana.

2 years later Addy and Lucy are seen on the run from Zona soldiers. It is assumed that they have been on the run from for the last 2 years. Addy is now seen with an eyepatch. This was most likely caused by her fight with The man. She and Lucy rescue a girl from her zombified mother from the car. They get back on the road on their way to Newmerica when they get captured by Zona soldiers. They are taken to a safehouse await for a new location. However Doc, 10K, Lily and LT. Muller comes across them neither of them knows they were there. One of the Zona soliders starts sniping them but ends up getting killed by 10k. Addy was put in charge of shooting at them. A soldier that was thought to be mercied ends up coming back making it very difficult to kill. This was the discovery of a Mad Z. 10K and Addy shoot it multiple times turning it back and forth to each other. After several times they managed to finally kill it. At the moment 10k shoots Addy. It was first presumed by Lucy that she was dead. However, Addy was only scraped on the cheek. Lucy gets taken by one of the soldiers. The other Zona soldier holds onto Addy overpowering her. As Lucy is being taken away Addy tells her that she will find her. Addy kills the Zona guard and sets out to find Lucy.

This is the last we see of Addy for the rest of the season.

"I thought I'd never see this thing again." - Addy about her Z-Whacker.

"I would give my left nut for that Z-whacker right now!" - Addy without her Z-whacker.

“Go! I’ll meet you there.” - Addy to Lucy about meeting her in Newmerica 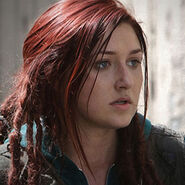 Retrieved from "https://z-nation.fandom.com/wiki/Addison_Carver?oldid=28014"
Community content is available under CC-BY-SA unless otherwise noted.