Start a Wiki
watch 01:11
The Loop (TV)
Do you like this video?
"A Nice Day for a Warren's Wedding" is the seventh episode of Season 4 of Z Nation and the forty-ninth episode of the series overall. It aired in the United States on November 10, 2017 at 8/7c .

Following the death of Lucy, the team is in a decidedly somber mood. There’s some tension in the ranks because they realize they’re still just sort of following Roberta’s blind hunches. When they find themselves outside of Detroit, Michigan at the Mystery Hill Carnival, it’s one of the first times that everyone questions Roberta’s judgment. While she tells them not to get involved, they decide to rescue a woman who reveals she was tied up there by the carnival inhabitants: namely the zuggalos (zombie-era juggalos).

Even though Roberta says they should just move on, Murphy is resolved to do something about the insane clown posse-loving murderers in the carnival funhouse and marches off to investigate. Roberta knows they’ll get sucked into whatever nonsense this is, and sure enough, as soon as they’re inside, they’re all roped into the terrifying circus games. And Roberta, all the while, is still having her visions. Every time someone is killed, she sees it in that terrifying hellscape with the black rainbow.

Murphy is hooked up to a high voltage machine, 10K is on a spinning board with knives thrown at him, and Doc is put in a face hole as pool balls are thrown at his face. Roberta plays a game with the King Zuggalo called "Drink for Your Life", where she has to answer trivia about The Insane Clown Posse. Roberta reveals herself to know a lot about the Insane Clown Posse and the King of the Zuggalos takes a new interest in her. They get into a rap battle and because she's good at it, she ends up his fiancée. Not because she wants to be, but because he says so. She's about to be their Zuggalo Queen. A zuggalo wedding involves blood rites and the traditional "sharing of the bride." But the whole thing is interrupted by Sgt. Lilly and the former Queen of the Zuggalos, Janice.

She decides she likes Roberta for her son, but the gang of zuggalos gets involved in a family feud about who's going to run the clan. They haul out the zombie patriarch, and then get into a fistfight over it. In the commotion, Murphy is able to connect the electrocution machine to the King and his mom and gives them a firm talking-to about parenthood. And some electric jolts.

When it goes too far and most of the posse becomes juggalo zombies, the team find themselves able to leave pretty quickly. Roberta confesses she doesn't know what they're doing and that since her hallucinations still don't make any sense to her, the team should just proceed to Newmerica.

"Let's not cry that she is no longer with us" - Doc 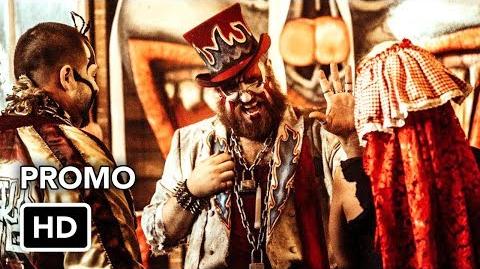 Retrieved from "https://z-nation.fandom.com/wiki/A_Nice_Day_for_a_Warren%27s_Wedding?oldid=27574"
Community content is available under CC-BY-SA unless otherwise noted.