Start a Wiki
watch 01:11
The Loop (TV)
Do you like this video?
"A New Mission" is the second episode of Season 3 of Z Nation and the thirtieth episode of the series overall. It first aired in the United States on September 23, 2016 at 8/7c .

We pick up right where we left off at the end of Season 2, with Roberta, Addy, Doc and Hector surrounded by Pan Asian solders. The leader of this squad is Sun Mei, and she's come all the way from Beijing to track down The Murphy and cultivate a cure for the zombie virus.

After some initial tension, the Operation Bitemark gang gets on friendly-ish terms with Sun Mei's brigade and together they hike through the wilderness to get to a supply drop. They've got to deal with the usual pesky Z's, and there's a new threat in town, too: insane, starving, feral humans known as the Enders. Luckily, Sun Mei's team is well-equipped with tricked-out weaponry like the Anti-Zombie Grenade, which utilizes multiple green lasers as a targeting mechanism and fires nail-like projectiles that explode on impact and they present Addy with a new and improved Z-whacker, complete with shocking new features.

Murphy makes it to shore with the Captain of the submarine and Dr. Merch, both under his mind control thanks to their Murphy bites. And 10K's with him, too, alive and none too thrilled to be teamed up with his least favorite person on the planet. Murphy's now completely disillusioned with humanity, and he's not going to provide a cure for Zona, so he formulates his own post-apocalyptic plan: populate the world with 'Blends,' which are essentially humans under Murphy's control.

Meanwhile, the road to the supply drop is treacherous, and Sun Mei loses all of her troops en routeand when they finally get to the supplies, they've been looted! Murphy got to the drop first, and he and Roberta have a heated face-off as he drives up in a fortified military vehicle. Murphy's even got a sniper in place should Roberta or anyone else try anything funny: 10K, who's now been bitten by Murphy.

After failing to convince Roberta and the gang to join his cause, Murphy drives off, leaving them to hike it back to Hector's truck and commence with their own new mission: stop Murphy from starting his new race of Blends.

Citizen Z and his dog have been rescued from freezing to death by a girl named Kaya. When last we see him, Citizen Z seems to be settling into semi-retirement up there in the zombie-free hinterlands, along with Kaya's Aunt and Uncle Kaskae.

The episode ends with The Man and he has a piece of paper with Murphy's name on it. He then follows the tire tracks. 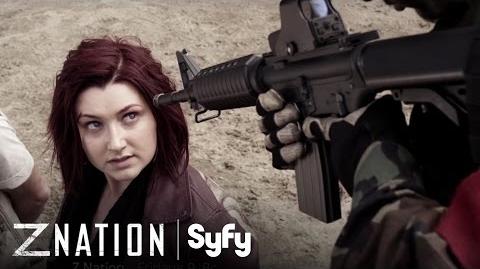 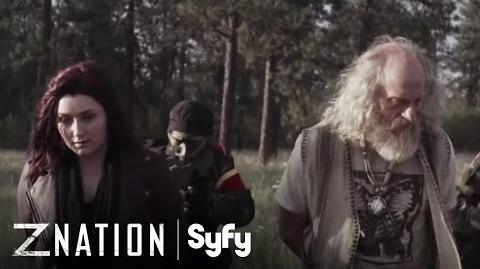 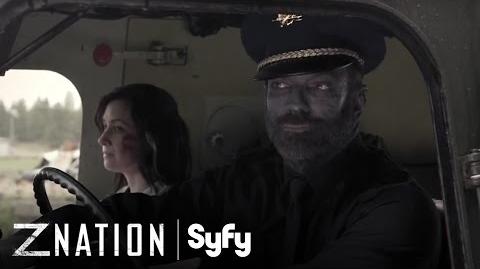 Z NATION Season 3, Episode 2 'Speak of the Blue Devil' Syfy
Add a photo to this gallery

Retrieved from "https://z-nation.fandom.com/wiki/A_New_Mission?oldid=23924"
Community content is available under CC-BY-SA unless otherwise noted.